Naturalization is the process of obtaining United States (U.S.) Citizenship. One can obtain naturalization automatically, by operation of law, or through a process of affirmative application through USCIS.

The status of citizen of the United States is coveted throughout the world. The right to live freely within the most prosperous nation on Earth and to help relatives to immigrate here as well is a cherished opportunity afforded to very few who desire it. At Connell Immigration Lw, LLC, our helpful immigration attorneys understand how fervently our clients long to live the American dream. Drawing on more than 19 years of experience, we help lawful U.S. residents complete the requirements to become full citizens of the United States.

Individuals who are born in the U.S. are automatically citizens upon birth. There are limited exceptions for those who are born to foreign heads of state or on foreign vessels in U.S. waters.

DERIVATION OF CITIZENSHIP BY NATURALIZATION OF ONE OR BOTH PARENTS

Children born outside the U.S. who have not acquired citizenship at birth may still derive citizenship when one or both parents naturalize.

Under current law, a child derives citizenship if one parent is a U.S. citizen by birth or naturalization, and the child is under 18, is a lawful permanent resident, and is residing in the U.S. in the legal and physical custody of the U.S. citizen parent. Stepchildren do not qualify under these provisions. 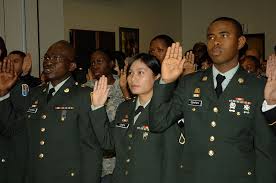 Members of the Armed Forces are allowed to naturalize under liberalized rules. To qualify the applicant must have served honorably for three years in any branch of the U.S. Armed Forces.

If the application is filed within 6 months of honorable discharge, the applicant must meet the following criteria:

There are no physical presence or residence requirements. There is no requirement to show good moral character for any particular period of time.

If the application is not filed within six months of honorable discharge, the applicant must show, in addition to the above:

If the applicant served during a war or period of military hostilities, there are even more relaxed requirements. The applicant must demonstrate:

There is no residency or physical presence requirement and the good moral character requirement is “at least one year.”

All individuals applying for citizenship through an affirmative application for naturalization must be at least 18 years old. In addition, applicants must satisfy the following criteria:

Certain individuals are not eligible for citizenship even if they have met the above requirements. These include people who have held certain ideological beliefs and people who have deserted the U.S. military. While criminal offenses do not of themselves preclude a person from being naturalized, people with aggravated felony convictions after 1989 are unable to show good moral character.

For a person to become a U.S. Citizen, he or she must prove “attachment” to the principles of the U.S. and the U.S. Constitution. To do so, applicants must take the oath of allegiance, which states in part, “that I absolutely and entirely renounce and abjure all allegiance and fidelity to any foreign prince, potentate, state or sovereignty, of whom or to which I have heretofore been a subject or a citizen.”

Choose a location to review

See all Reviews
Review Us